We're coming up on the halfway point of our Primeval Thule Campaign Setting Kickstarter, so as you can imagine, I have a lot of Thule on the brain these days. By the way, in case you're curious, it turns out it's supposed to be pronounced something like TOO-lay. Just about everybody I know just calls the place THOOL, and that sounds OK to me, so I'm not going to correct 'em!

If you've backed the Kickstarter already, then thanks! We're very excited to bring you this world and we think it's going to be a ton of fun. Please, please, please spread the word -- post our link on your social media, tell your friends, let folks know what we're doing! Fighting the awareness battle is harder than I thought it was going to be.

If you haven't backed the Kickstarter, then I invite you to go take a look at Rich's Secret Project of the last few months. Here's a link:


Anyway, here's a little bonus for you Pathfinder/3rd Edition fans out there: The beastman monster stats. I used these in my PaizoCon playtest/demo of the game. We don't have 4e or 13th Age versions of this stat block available yet, but this should be a nice taste of one of the more prevalent monsters you might encounter in the jungles of Thule.

Many dangerous beasts roam the forests and jungle of primeval Thule, but none are more dangerous than the sort that walk on two legs and possess the wickedness and cunning of a human—or nearly human—mind. Whether Thule’s beastmen are a degenerate branch of humanity slowly returning to the unthinking apes of their distant ancestry or a separate evolution of humankind altogether, only the wisest of sages could say. But anyone who runs across these violent and greedy creatures quickly discovers that they are the most monstrous and savage of Thule’s barbaric jungle tribes. The warriors of Lomar say that it would be better to kill oneself rather than to fall into the clutches of the beastmen alive—and they’re right. 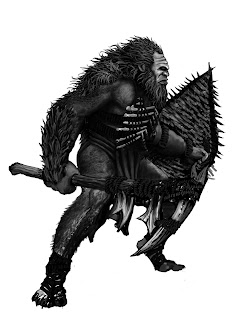 Beastman
Tall, hairy, and thickly built, this warrior appears to be more ape than human, and wears nothing but crude animal skins—but humanlike cunning glints in his dark eyes.


Fury (Ex) On the first round of an encounter, a beastman gains a +2 bonus to melee attack and damage rolls.
Bolas Expertise (Ex) Beastmen are experts with bolas and can choose whether to deal lethal or nonlethal damage with bolas attacks. Instead of making a ranged trip attack with bolas, a beastman can choose to entangle the target on a hit. An entangled target can escape with a DC 15 Escape Artist check (a full-round action), burst the bolas with a DC 25 Strength check, or attack the bolas cords with a type S weapon (5 hit points).

Beastmen are a primitive branch of humankind. Brutal, cruel, short-tempered, and contemptuous of anyone weaker than themselves, they are fierce warriors and raiders who pose a great threat to anyone traveling abroad in the wild lands of Thule. Beastmen are especially notorious for seizing captives and dragging them back to their lairs to be put to work as drudges, sacrificed to their bloodthirsty gods, or simply tortured to death in horrible ways for their amusement.


Beastmen hate humans (and most other intelligent races for that matter). They see all other peoples as enemies, and do not hesitate to kill any they cannot carry off into captivity. They have been known to engage in cannibalism, although this is considered a sacred ritual among their kind and requires the appropriate ritual preparations—eating their foes is an act of dominance, not sustenance.


Beastman leaders are usually barbarians, rangers, or druids. They fear divine and arcane magic, and usually put captive spellcasters to death in peculiar and horrible ritual murders to ensure that the “bad magic” dies with its users.

Beastmen are not normally PCs, but if the GM wishes to create unique beastman villains, then beastmen can be advanced by adding class levels. All beastmen have the following racial traits.
+4 Strength, +2 Constitution, –4 Intelligence, –2 Charisma: Beastmen are strong and hardy, but tend to be cunning rather than bright.
Scent: Beastmen posses the scent special ability.
Bolas Expertise: Beastmen are proficient with bolas and gain the benefits described above.
Language: Beastmen begin play speaking a debased form of Common.

Hi, everybody! Welcome back. You may have noticed that I’ve been slow posting in the last few weeks, but  I can finally own up to the reason (drum roll please)…


I’ll add the direct link when our Kickstarter page goes live, but for now, here’s a link to some info on the Sasquatch site. We’ve got some great concept art and some blog posts by yours truly posted there, and we’ll be adding to them throughout the campaign.


Primeval Thule is the debut offering from Sasquatch Game Studio, my new company. Me and my fellow WotC expatriates Dave Noonan and Steve Schubert are teaming up to produce top-notch new game products for the D&D game under the aegis of the Pathfinder OGL and the 4th Edition GSL. In addition, we’ve also received permission to produce a version compatible with the new 13th Age RPG system. We’ve been working up to this day for almost three months, and it’s finally here!
So, why Primeval Thule, and why now? The answer is simple: I feel like the big shots in the RPG industry have gotten out of the business of world-building, and that strikes me as a damned shame. TSR published astonishingly creative worlds such as Spelljammer, Dark Sun, Planescape, Birthright, and Al-Qadim back when I was just beginning my career. Those wonderful flights of imagination inspired thousands of gamers and remain well-loved twenty years later… but the hard math of the contracting hobby game industry over the last ten years drove the big companies to turn to safe bets, such as rules-intensive sourcebooks aimed at a player-focused audience instead of the GM-focused setting material. There are four to five player for every GM, after all, and building worlds is an expensive gamble. The last comprehensive new world published by Wizards of the Coast was Eberron, and that was introduced ten years ago. If you started playing in the 4th Edition era, you’ve never seen the debut of a new D&D world.


I spent years urging a return to world-building at Wizards of the Coast, but unfortunately, it just never came around again. But now that I’m my own man, I can finally do something about it—put my money where my mouth is, so to speak. Fortunately, my gaming buddies and former colleagues Dave and Steve share my belief that the D&D multiverse is just about ready for a new world or two. The Primeval Thule Campaign Setting is our offering, a sword-and-sandals lost-world setting of barbarians, thieves, scheming wizards, and Great Old Ones. It’s Conan vs. Cthulhu. It’s Hyperborea. It’s Pellucidar. It’s Dark Sun with jungles and glaciers. It’s every Frank Frazetta painting that graced the cover of a pulp fantasy adventure novel with a brawny swordsman, a fearsome monster, and a half-naked woman. (We’ll empower women a little more than that, of course—it’s the 21st century and women are perfectly capable of saving themselves. But you know the kind of book covers I’m referring to!)
We mix up the standard tropes and expectations of the implied D&D world of elves, dwarves, demons, and dragons, blend it with barbarians and unspeakable Things from Beyond… and set the whole thing in a young, uncivilized world lost in the mists of prehistory. This is the world of Primeval Thule—and we think it’s long overdue in the family of D&D worlds.


So, that’s my pitch for what the world is and why it’s awesome. I don’t often say this to those of you who keep up with my blog, but… I’d sure appreciate it if you helped to spread the word. Tell the D&D players you know to pay a visit to Kickstarter.com sometime in the next few weeks, watch the video, check out the concept art and decide if they’d like to back us. We’re going to deliver a great setting full of ready-to-use adventure, savage new monsters, new character building tech, and the first really new world to come along in a long time. Check us out, and tell all the gamers you know!
Oh, and one more thing before I forget—you might want to get to Kickstarter early on Tuesday. We’ve got a couple of limited early-bird specials, and I think they might go fast!


See you in Thule!