On Saturday, I did something that I hardly ever do anymore: I sat down and watched a DVD. These days, it’s so much easier to just wander over to whatever’s playing on the movie channels or to check out On Demand or Netflix. Somewhere along the line I became too lazy to actually get up, root through the DVD collection, pick out a disk, turn on the Blu Ray player, and then remember which input mode on the TV brings up the player. Fortunately my daughter Alex was home, and she wanted to watch some anime and spend quality time with her sister Hannah before going back up to school. She decided to watch Princess Mononoke.

I watched Princess Mononoke once before, sometime back in the late ‘90s. I didn’t remember it all that well and what I did recall was that it was confusing (hey, it’s been like twenty years), so I tried to watch it a lot more carefully this time. It’s a really strange story, with lots of morally gray characters. In some ways, there isn’t really a villain—even the lady who runs Iron Town and seems to be doing the most villainous things in the story is a protector of lepers and mistreated women. We’re really used to Westernized story arcs and roles in our entertainment, and it’s a bit of culture shock to be immersed in a story told in a different way.

It was especially fun to watch Hannah (an 18-year old anime fan) become engrossed in the story. She’d never watched Princess Mononoke before. Early on, I could tell she was really struggling to digest the conflicting messages about the characters and their motives. But she was completely hooked halfway through, and by the end she was literally sitting on the edge of her seat (and observed at one point, “Okay, now this is terrifying.”)

I’ve only seen a half-dozen or so of the Studio Ghibli movies: My Neighbor Totoro, Kiki’s Delivery Service, Castle in the Sky, Spirited Away, Howl’s Moving Castle, Princess Mononoke, and Ponyo. Of those, I’d say my favorite is Castle in the Sky (possibly the best steampunk story anyone’s put on film so far). It’s also the most conventional (well, Western conventional) story arc of those half-dozen movies. It makes me wonder if I like it best because it’s delivering a story in the format I’m most used to, or if I like it best because I like the steampunk world in which it takes place.

Speaking of steampunk: Being a gamer, I also find myself wondering what’s the most definitive steampunk/anime RPG experience out there. Big Eyes, Small Mouth comes to mind, but it’s not really focused on steampunk. Castle Falkenstein and Space:1889 are good steampunk settings, but they’re also old. Where’s the 21st-century RPG that provides the definitive steampunk adventure? It seems like a real oversight on the part of tabletop RPG publishers everywhere. Maybe I’ll do something about that as soon as I get a suitable window in my schedule.
Posted by Richard Baker at 10:09 PM 3 comments:

Okay, so I know I mentioned Valiant Dust just last week, but this is pretty cool: Tor revealed the cover for my book today! I am super-happy with the artwork and the snazzy cover design work (and Mike Stackpole’s generous testimonial is double-super cool). Here’s a link if you’d like to go have a look for yourself.

I’ve been a big fan of the Civilization franchise for something like twenty years now. I pretty much run out and buy each new edition as soon as I can find the right moment to pick up a twenty-hour-a-week habit for a couple of months. So I’ve been happily exploring Civilization VI for the last month or two (at substantially less than twenty hours a week, since I am insanely busy these days). I’m still forming my impressions of how the newest offering stands in comparison to previous versions, but I generally like it so far. I like laying out districts for my cities, I like the civics and government, I like the lower number of units on the board, and I like the mix of strategic and luxury resources. It’s a fresh new take on the series, which is probably good—it would have been very hard to “out-Civ 5” the Civ 5 game.

One thing I wish the diplomacy interface let you do: I wish there was more of a “same to you!” function available. When a NPC leader Denounces me, I want a button right there on that screen to Denounce the guy right back. And when a NPC leader asks to build an embassy in my capital, I want an option that says, “Sure, if I can build one in yours.” In the mid- to late game NPC leaders *never* let me build embassies. It’s hard not to take that personally.

I’ll touch on Civ VI a little more as I play through a couple more games, but so far I’ll give it a thumbs-up.

You Ultimate Scheme fans out there will be happy to know that I’ve got a rough design hammered out for Plan Number B, the expansion deck for Ultimate Scheme. We’re lining up artist Claudio Pozas to do our card illustrations again, and we’re playtesting right now. Plan Number B introduces 5 new factions, 3 new ultimate schemes, and a couple of new X-factors. The biggest new elements of the expansion are a brand-new scheme deck (Power schemes) and the introduction of the Interpol Agent (that mysterious pawn from the original box), plus plenty of Action cards to support the new stuff.

I generally feel that game expansions ought to offer something besides just “more,” so you’ll find that the Interpol Agent provides you with a new complication to scheme around (and a new weapon to use against your rivals). The Power schemes are built around a theme of controlling the Interpol Agent and accomplishing special “mission” schemes that offer valuable new abilities as rewards. With a little luck we’ll have Plan Number B finished up in about 4-6 weeks. We’ll print and ship it very quickly after that, since we’ll be using a print-on-demand vendor for this (it’s a pretty small print run).

That’s all for now!

Posted by Richard Baker at 11:26 PM No comments:

Hi, everybody! Welcome to my newly updated blog for 2017. As you can see, I made a few changes to the template, updated my profile, and came up with a new name. Atomic Dragon Battleship was fun, but it wasn't particularly clever or any kind of play on my name, so I decided to up my game a bit. I've never actually been to Bakersfield, but it rolled off the tongue better than Baker City (it's in Oregon, and I have been there). I would have called it Baker Street after Sherlock Holmes' famous address, but Jeff Grubb kind of beat me to it with his Grubb Street blog. So Baker's Field seems okay for now.

I'll try to keep my posts shorter and more frequent than in the past. So, without further ado, here are three things I'd like to share to start the year.

I'm busy working on a new series of military-themed science fiction novels for Tor Books. The first one is entitled "Valiant Dust" (it's a reference to a Kipling poem), and it'll be out early in November (2017). I've actually been done with the book for more than a year, but publishers have schedules to keep, and I had to wait for a slot to open up. Valiant Dust (and its sequels) tell the story of Sikander North, an officer from the colony system of Kashmir serving in the star navy of the Commonwealth of Aquila. I'm pretty proud of it and I think it's a good read! I'm now working on book 2 of the series, working title of "Restless Lightnings" (another Kipling reference).

Back in September, my friend and former WotC colleague Daneen called me up because her employer En Masse Entertainment (publishers of the popular TERA MMORPG) had just landed a big new localization project. Daneen needed writers, stat! So for the last few months of 2016 (and the first couple of months of 2017) I've been working in a contract gig with EME to help bring a Korean game to the US market. I don't speak a word of Korean, but fortunately we're working off files that have already been translated.

One of the interesting parts of the experience is that I'm working in downtown Seattle for the first time since moving out to the Northwest in 1997. I catch the train in Auburn at 8:01, I debark at King Street Station around 8:35, and I walk a short mile to the En Masse office (3rd and University), arriving a few minutes before 9:00. It's strange to be a non-driving commuter! I only wish the train ride were a little longer so that I could do some serious writing in transit.

At GenCon this year, fellow Sasquatch Dave Noonan persuaded me to buy into Privateer Press's excellent Warmachine Miniatures game. I'm still learning how to play, but I'm having a ton of fun assembling and painting minis again--it's been a good 15 years since I did any painting at all. My faction is the Protectorate of Menoth. Here's a look at my Vanquisher (I use an alternative paint scheme featuring off-white and Prussian blue, just to be creative). 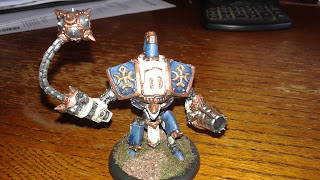 That's all for now!

Posted by Richard Baker at 1:54 PM No comments: