Hi, folks! This week, a few words about City of Heroes, the mysterious continent of Aduria, and The Four Feathers.


Gaming Part I: A bit of sad news came in this week: City of Heroes is shutting down for good next month. It’s a strange thing when an MMO dies; most of the time when a game company closes its doors, you can keep playing whatever you bought from them for as long as you want. I have dozens of games from defunct companies that I pull out and play occasionally. Even old PC software resurfaces in places like Good Old Games or Beamdog. But when someone turns off the server for a MMO, I guess that’s it.
City of Heroes is, so far, my favorite MMO. I played the hell out of it for several years. I started playing mostly because I wanted a change of genre for my personal gaming; when you work on D&D all day and write D&D novels at night, well, you’re not in a rush to make a D&D clone your principal timewaster in your leisure hours. I was a very late adapter for WoW as a result, and invested in City of Heroes first. I ran through the game levels 1 to 50 several times, and played with a good group of my coworkers and friends for many months.


City of Heroes had an amazing variety of character types compared to WoW or Star Wars or most other big-budget MMOs; not only did a role like Tanker or Scrapper come with a hundred builds instead of three (each had something like 8-12 offense sets and 6-10 defense sets, for 50-100 combinations), but you also got to use the awesome character illustrator tool to make your beginning character absolutely unique. You weren’t just playing with minor details like hair color or eye color or the shape of the face; you could build a *concept* for your character that was absolutely your own, and was reflected in both powers and appearance. I built awesome characters like Ghost Marshal, the rifle-armed flying stealthed hero in a duster, cowboy boots, and a Western hat; Runemight, the arcane champion who used dark melee powers to fight evil and whose slate-grey skin was covered with glowing purple runes of power; and Moon Mage, the Dr. Strange-esque masked magician who aided other heroes with his lunar sorcery. Building characters like that felt *amazing* -- while World of Warcraft was a big sprawling place to explore, you never got that same sense of character investment from your race and class selection.
I haven’t played City of Heroes much in the last couple of years; I guess people like me who moved on are why it’s going away. But I think it’s important to look back and celebrate what a good game it was, and what it did better than any of its competitors: It let you *create* something amazing.


Gaming Part II: As requested, here is my old map of the mysterious southern continent in the Birthright setting. It turns out my sketch of Aduria has been kicking around the internet for a while now, but some of you Birthright fans might not have found the right spot, so here it is: 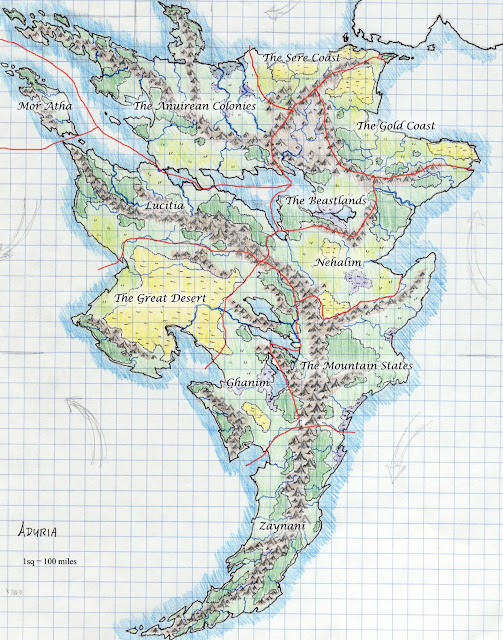 I can’t claim credit for the nice labels; those were added by someone else whose image I’m linking to. (Since I’m the original creator of this map and I came up with most of the names on it, I feel no guilt about that.)
And here’s a link to descriptions of the various areas:


The birthright.net site is a fantastic resource for you diehard Birthright fans out there. If you’re not familiar with it, you really ought to wander on over and visit sometime. A lot of the language and content around the Lost Continent of Aduria wiki entry looks pretty familiar to me. A long time ago I wrote a small series of online articles (or was it for Polyhedron? I don’t remember) that described the former Anuirean colonies of Aduria’s northern coast. The Sere Coast, Oeried, Rhandel, Lurech, and Mhor Atha are drawn from my work on that article. The area labeled Lucitia is where the realm of Alitaine exists in the current day of the setting (although Alitaine also extends to the plains on the north side of the inland sea). Alitaine is the accommodation we made to work Aquitaine into the setting, as I noted in my comments on last week’s post.
I think that Ed Stark and Carrie Bebris came up with Nehalim, Ghanim, the Beastlands, and the Mountain States. Zaynani, I don’t remember. I seem to recall a concept meeting back in the old TSR building where we talked about how my map sketch for Aduria ought to be filled in; I think many of these notions came from that meeting.


Anyway, you Birthright diehards out there: Enjoy!
Politics/Current Events: A double shot of gaming this time, so I’ll skip it for now. Be sure to tune into the first presidential debate on Wednesday, it ought to be a good one.


The Finer Things: I watched The Four Feathers the other night—the 1939 version, which is regarded as the best of them all. It’s a great old movie that I hadn’t ever seen in its entirety. It’s set against a fascinating historical backdrop--the Mahdist uprising in the Sudan and the 1898 Battle of Omdurman. (Interesting historical tidbit: a young Winston Churchill was with Kitchener at Omdurman.) Anyway, The Four Feathers reminded me a lot of one of my other favorites from the same era: Beau Geste. The novel itself is not very PC, but it’s a product of its times, and it’s a classic adventure story. For that matter, I’m a big fan of Lawrence of Arabia, too. I guess something about the combination of desert, the British Empire, and rousing adventure works for me. They just don’t make movies like those anymore.